A friend posted this link (The hard part of easy: when your second child doesn't have a disability) from the blog, What Do You Do, Dear? on FB today and as soon as I started reading, the tears began to fall, fast and furious.   (Apparently I've been holding them back for awhile.)
And I wrote this message to her:

“I had to wait till I stopped bawling to thank you for sharing this. It is EXACTLY how I have been feeling since Harper was born and thought that there must be something wrong with me because my experience with her wasn't as "easy" or "healing" as it was supposed to be!!”

You see, ever since Harper was born, I’ve had this internal struggle concerning some of my thoughts and responses to having an almost full-term, but still healthy baby.  I mean, isn’t that exactly what I had wished for Jack?  Right after he was born, I was ready to have another baby.  I wanted a do-over.  When he was born, any and all expectations I had were completely overturned and upended.  Most actually ended up in the trash.  And I so grieved a “normal” and healthy start for him and for me.  I figured there was no way that would happen again with the new baby (after she arrived safely, of course). I assumed, and everyone assured me, that this baby would be SO much easier and would help heal some of the pain from my experience as a new mom to an extremely premature and extremely sick baby.  But it’s not just Jack’s NICU stay that was traumatic.  It was his first few years, as he (and I) fought for each milestone…from breathing on his own, to eating without a feeding tube, to jumping with both feet...the fight continues even now, almost 5 years later.  So when Harper arrived, I was simultaneously overjoyed and sad....relieved, yet reliving the guilt and pain from Jack’s birth, infancy and toddlerhood.  Her arrival and the months since have been anything but easy, and nowhere near healing.   I have marveled at the ease in which Harper does all the things that Jack worked so hard to accomplish.   The author describes it much more eloquently than I can:

"Every high was a low. Every single easy– the smooth curve of her back unbound by gauze and tape, the morning change of her clothes wherein there was no part of her I wasn’t allowed to touch, the steady breathing that just happened without prompting– was a unique kind of hard."

And it makes me happy for Harper, and sad all over again for Jack’s rough beginning.  Is re-grieving a word?  Because that’s what I feel like I’ve been doing.  While I was pregnant with Harper and feeling like a ticking bomb, I wrote about living in two different worlds.  And now, I feel like I’m living a double-life…as "two different moms," like the author's friend suggested. And reconciling the two can be difficult some days.  As the author writes, “It opens a door to what might have been. It breaks you in two.”

But I am so grateful to have these two kiddos to help me along the way. 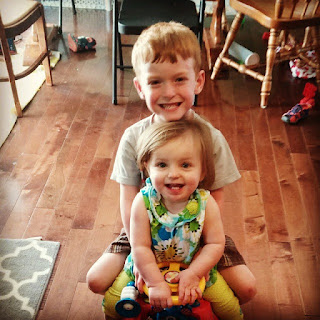