I've never been comfortable with the concept of  the "power of prayer" - as in, if you just pray hard enough or often enough or say just the right prayer at the right time, then everything will be just fine.  In fact, I'm not okay with "just fine" either.  Everybody's "just fine" is different.  Distracted already...blame it on the pregnancy.  Where was I?  The "power of prayer."  I guess I just don't think it's fair to expect people to believe this theory/concept.  What happens if the people who pray most often and pray the hardest still have bad things happen to them?  Or does someone's loved one die because they just didn't pray often enough?  Or have the right amount of people praying?  The "power of prayer" and God not giving you "more than you can handle" - both on my list.

So, that being said, I DO believe in praying and the importance of prayer (just not it's all-encompassing power).  And we were always so grateful to hear that people were praying for Jack while he was in the NICU.  I prayed for him often...hard...all the time.  But I tried a different type of prayer (and still do).  Instead of praying for God to do something for Jack (heal his lungs, send him home), my prayers were always that of thanks for what he already done for him or us.  "Thank you, God, for helping Jack breathe today without needing a ventilator."  "Thank you, God, for allowing Jack to tolerate his feeds today."  I'm pretty sure that I didn't want to pray for or ask for the wrong thing.  (Okay, maybe I believe in the power!).  Either way, this type of prayer helped me stay focused on what was happening, rather than what I wanted to happen.  I think Jack was praying the same kinds of prayers too. 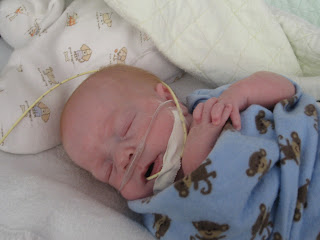 Which brings me to today.  I've been praying the same kind of prayers for baby sister.  "Thank you, God, for allowing her to grow these past 24 weeks."  (Just had an ultrasound and baby girl is in the 42nd percentile, measuring at 1lb 6oz.  Right on target.  Not too big, which my gestational diabetes could cause.  Not too small, which possible preeclampsia and IUGR could cause.  I had both with Jack.)  Before the ultrasound, I had just attended Jack's first preschool "Harvest Party."  It's funny how different kids act when their parents are around (my Jack included).  I'll just leave it at that!  But, then, I got this surprise e-mail from Jack's teacher.

"I totally forgot to tell you about something Jack has been doing in class.  It is ADORABLE!  Every time we say a prayer, I ask them to fold their hands.  When I do this, he immediately comes over to me and says "fold hands" and puts his hands out toward me.  I put my hands over top of his and we fold them together to say prayers.  He knows all the words to the prayers!  It melts my heart when he does this!  Enjoy your weekend!"


And I have no words.  Just tears. 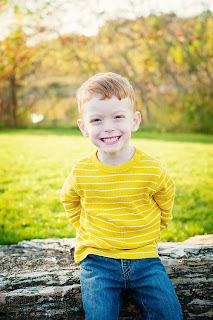 I’m sure if you asked any of you, you have a favorite month.  I do.  I love October.  It has always been one of my favorite months.  I love the sweatshirt and jeans “football” weather (must be the former cheerleader in me!).  I love that this month is the start of many celebratory months…Thanksgiving in November, Christmas in December, the New Year and then my birthday in February!   I love Halloween costumes and décor.  My friends and I even dressed up as we got older, renting a bus or trolley to take us around town in our creative costumes.  One year, I was Chef Boyardee and handed out real pizza.  A few years before that, a group of us were dressed as people from the Publisher’s Clearinghouse, complete with a big check and a surprised winner in her bathrobe and curlers!  And I can forget the treats…I love candy corn.  I especially love big, round, orange pumpkins!   Although, I should admit that I’m partial to those mini “Jack B’ Little” pumpkins these days too!  Many have a specific image or item that is symbolic for them, that gives them hope or inspiration, be it a rainbow or a butterfly.  It may sound strange, but a pumpkin is that symbol for me.

October 2009, I placed a large pumpkin on our front porch and he stayed there through November.  By December, he was started to disintegrate, so I pushed him off the porch into our flower bed.  Yep, pumpkin parts and flower seeds everywhere!  Hubby wasn’t too happy, but I was secretly hoping for my very own pumpkin patch.  Jeff made an attempt to remove all the seeds, but little did I know that one little seed pulled through and began to sprout.  He had survived the harsh snows of February and March, the same time I became pregnant with Jack…whose due date was October 28.  I was super excited for an October baby…my favorite month.  He would be my little pumpkin!  As it turns out, Jack would be a summer boy (which suits him well), instead of a pumpkin…yet, that little pumpkin had just started growing and maturing in our front flower bed just as he was born.

Jack would do the same growing and maturing in a less nurturing environment, the NICU, which made October just a little bittersweet for our family.  Especially after Jack passed his due date in the NICU and stayed even 4 weeks longer.  So, while Jack’s birthday remains in August, I will always think of October as his “developmental” or “milestone” birthday.    I try not to get to stressed about missed milestones, unless they are truly missed by October.
Each year, those October memories remain, but the sadness and uncertainty have surely begun to fade and the month of October brings new memories to be made.  More pumpkins to give hope.  More candy corn to eat!  Yep, October is still my favorite month.  And any October with Jack in it is one to celebrate.

Posted by Unknown at 7:29 PM No comments:


This weekend, I flew to Nashville for a quick trip and couldn’t be more in awe of the Preemie Parent Alliance (PPA) and its members.  Alliance...sounds like a group of superheroes, huh?  That’s because they are.  The PPA is an inspiring and influential group of parents affected by prematurity.  They have taken a traumatizing, and often heartbreaking, experience and are doing good with it.  More than good.  Great things.  Powerful things.  Not only are they empowering parents, they are concretely helping preemies and their families.   They have influence over the care premature infants and their families receive by medical professionals.  They are changing perceptions about prematurity.  They confirmed what I’ve always felt.  Prematurity is a big deal.  Not in the paparazzi take my picture kind of big deal, but in the life-changing, long-lasting impact type of big deal.  Maybe they could help you.  Or maybe you can help them.  Check them out:  PPA Members.  Each group in the PPA is unique, but as a whole have a common goal.  Yep, superheroes.  I want be just like them when I grow up. 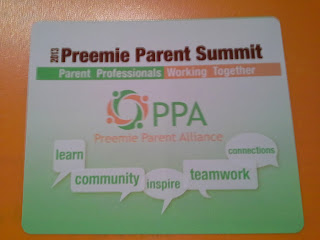 I would be remiss if I didn’t mention what made this opportunity possible.  The Foundation for Prematurity is a local (PA), newly formed foundation whose mission is to give grants to families of preemies needing financial assistance for therapies and interventions.  About 2 years ago, I joined support group of preemie moms.  Turns out, the founder had been working for years to get this foundation off the ground and asked me to be on the board.  We are currently looking to give funds (yep, $$$) to families who have therapies and interventions (for their preemie of any age) that aren’t covered by medical insurance or medical assistance (in PA).  This foundation gives directly to families.  Check out our website:  nevertoosmall.org.   No baby is too small.   No need is too small.  No donation is too small.
And, I can't forget my own little superhero who really made this all possible!  Jack is doing great.  Loving preschool and his therapies.  Adjusting well to my being back to work (probably better than I am).  Not sleeping in his race car bed.  Getting more aware of the fact that "baby sister" will be here in a few months.  Talking more and more every day.  Even when he's being defiant, "I not nap.  I not eat." - I can't stop myself from smiling because he's using sentences!  He loves to run now (and looks much more comfortable and fluid when he does...less like Phoebe from Friends), is always asking us to "take his picture," and is finally using a fork more consistently.  Here's a little video to prove it.  (Notice how he asks me to put the food on his fork and tells mommy and daddy to clap their hands after he is successful.  He's a fun kid!!)