"He's Not Going to Go To Kindergarten With It" 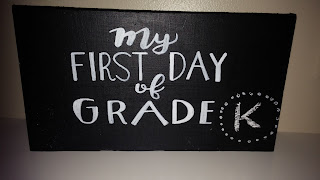 When Jack was in the NICU and on one type of breathing support or another, his nurses liked to say, "Don't worry, he's not going to go to Kindergarten with it."  But I worried.  Some NICU parents are optimists.  They can envision their child in the future, heading to school or playing a sport. Others, like me, just lived in the present, making it through each day.  I found it hard to project into the future.  Maybe it was because Jack was our first child.  I had no other parenting experience.  So I didn't see him on his first day of school or at his first soccer practice.  Kindergarten seemed SO far away.  And now it's tomorrow.

My way of coping (living in the present) actually turned out quite nicely, though, because each new thing Jack does or each new moment we experience together is always a nice little surprise.  But his special NICU nurse could see his future and probably aren't surprised.  One nurse in particular, we call her Aunt Cindy, told me about a dream she had of him after he had been in the NICU almost 3 months.  She dreamed that Jack was in his Kindergarten classroom and she was standing at the back. (Mind you, he weighed about 4 pounds at the time she had this Kindergarten dream and was still using C-Pap for breathing and was getting his nutrition from a feeding tube...and lived in a hospital.  I couldn't see past all of that.  But she could.)  As she watched him in his classroom, he turned to her and said, "You can go now Aunt Cindy."  That was it.  A simple dream.  But I'm so grateful she told me about it.  She helped me look forward to something that I was afraid to dream of for our Jack Ryan.  Those NICU nurses.  They save babies...and their mamas too.

I had to leave him every day, for 112 days, while he was in the NICU.  (I know I mention that A LOT.  It's not something you ever forget, the leaving.)  So sending him to Kindergarten isn't giving me as much anxiety as I had thought.  I've had to let him go so many times before.  But this "letting go" is so much different.  Then it was drenched in fear; now in pride.  Our boy has grown so much, in so many ways in the past 6 years.  He has worked hard.  So hard.  And now he's ready to take on the world.  Ok, maybe just Kindergarten.  But he is ready.  I'm not going to make any predictions, but I can't wait to see what his future will be.

(Pictures of the first day, accompanied with a full report, will follow!)

Posted by Unknown at 6:09 PM No comments:

On the night you were born
The moon smiled with such wonder
That the starts peaked in to see you
And the night wind whispered,
“Life will never be the same.”
Because there had never been anyone
Like you ever in the world.
So enchanted with you
Were the wind and the rain that they
Whispered the sound of your wonderful name.
Heaven blew every trumpet and played every horn.
On the wonderful, marvelous night you were born.
(On The Night You Were Born by Nancy Tillman, 1995) 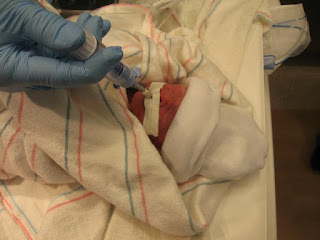 6 years ago, at 10:12pm, my life changed completely when our 2-pound baby boy entered the world.  And since that moment, I have had so much to say about Jack and this journey.  His journey.  My journey.  Our journey.  I still have a lot to say, just not as much time to say it.  Plus, he’s been talking for himself these days.  Non-stop talking.  (Perhaps he’ll start writing, or at least dictating, his own posts soon.  He’s a whiz with an iPad.)  But, as Jack turns SIX and gets ready for Kindergarten, I was trying to think about what I wanted to say to his teacher.  Do I tell her everything, or just the basics.  Or nothing at all.  Blank slate?  Or book filled with pages?

And I decided that all I want her to know…all I want anyone to know about Jack…and most importantly, what I hope Jack knows about himself.   That he is enough.  That he is amazing.  Simply because he is Jack.  He’s not amazing because of all the awesome things he has accomplished in the past six years, of which there are many.  He won’t be amazing for all the wonderful things he will do in the future.  All of that may be outstanding.    But all of those things don’t make him amazing.  He is here.  He is alive.  He is Jack.  Or, in other words, amazing. 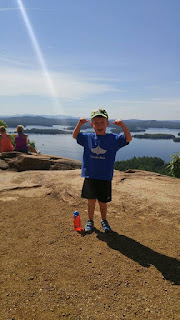 Posted by Unknown at 8:38 AM No comments: