I couldn’t decide whether to write this post about flu shots or feeding, because both are high-priority in the land of prematurity.  I just read an article with tips to protect yourself from the flu and it basically said, “Wash your hands,” “Stay away from sick people” and “Get a flu shot.”  As a parent of a medically-compromised kiddo, I guess I live in a perpetual flu season, because we do all those things, obsessively almost…and have since Jack was born with damaged, undeveloped lungs.  But, I felt the need to talk about feeding on this Flashback Friday.  A few days ago, I found a document I created to explain how to feed Jack.  Simple, right?  Think again.  It involved over 25 steps (Feeding Jack).  I’m also part of a few online preemie parent support groups.  Not a day goes by that at least one parent is looking for advice or understanding about the feeding issues their preemie might have.  While Jack’s lung health has always been a major issue for us, closely connected to that is his weight and growth because both contribute to his lung health. We left the NICU, with a little guy who took maybe 40% of his feedings by mouth, a feeding tube and pump and no real plan except an appointment at a feeding clinic.  I always say, "It felt like we were dropped off a cliff with no one to catch us."  (And we were probably afraid for someone to catch us, because they might have germs and make Jack sick!)  We were not prepared for the feeding struggles ahead. 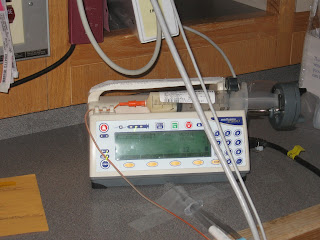 Suffice it to say, the feeding clinic (see old blog post:  Feeding Clinic a Bust!) was not the answer we thought it would be and Jack continued with the tube feedings until he was around 8 months old.   Some babies leave the NICU with a surgically placed feeding tube (Jack’s was temporary and replaced by us weekly - don't get me started on how awful it was to force a tube down his nose into his stomach.  I was afraid he'd never forgive me.  He has.  I think.).  That surgical option was suddenly offered to us right before discharge and I said no (Thanks for the advice, Aunt Jul!).  At that point, it wasn't medically necessary and was more for convenience.  I wanted to feed him as naturally as possible, even with a tube, so we opted to try the temporary NG tube for as long as possible.    Whatever the nature of the tube, I had a very, very difficult time accepting that I couldn’t feed Jack naturally.  It was such a disheartening part of this journey and I’m sure that Jack felt my desperation at every feeding.  Nourishing your child is just one of those things you expect to be able to do.  Add it to one of the many expectations we threw out when Jack arrived early.   Jack was very slow to gain weight; his lung disease made it so that he burned extra calories just breathing, so eating on his own without the tube/pump was really futile.  Nourishment or energy gained from the bottle was depleted just by drinking.  We wanted him to eat “normally,” but we didn’t want to compromise his lungs.  We had a few “He’ll eat when he’s hungry” comments, and I naively believed that to be true.  But, his early arrival suspended some of the typically developing reflexes…he did not show hunger and most likely would have gone days without eating if we let him.  We did not…we actually fed him every 3-4 hours for those first 8-10 months, even waking him at night when he’d rather be sleeping.    I still struggle with the fact that his developing brain was not getting enough rest...but nutrition won out. 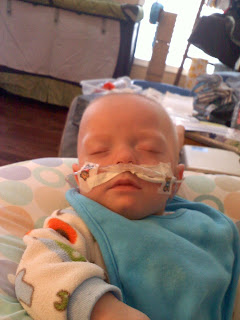 We took solid foods slowly; Jack enjoyed purees and baby oatmeal.  We tried not to push and restarted baby food more than once and I have to say I was completely shocked that he didn’t show the signs of oral aversions that I feared for him and that so many preemies develop (and understandably so…after all the trauma that has occurred in or around their mouths from birth).  There is even a diagnosis called Post-Traumatic Feeding disorder (http://main.zerotothree.org/site/DocServer/handout_excerpt_2.pdf?docID=8181).   We learned a lot from other parents and had an OT (thanks, Miss Lisa!) who was really helpful.  I learned that little mouths like Jack's want texture, but not mixed textures (Stage 3).  I learned not to scrape the leftover food from his chin...and to make sure he had a lot of positive associations with his mouth.  I learned that some baby's skip baby foods and go right to table food...and so much more.  I also learned that feeding issues aren't just for preemies. 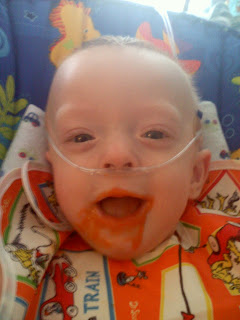 Jack ate the same solid foods for months and months…shredded cheese, mac & cheese, peas, pancakes…and just recently, after turning two, is starting to branch out into real food (pizza, chicken, edamame, sausage) and actually showing hunger and asking to EAT!   Even though I consider him a good eater at this point, he is still diagnosed as “Failure to Thrive”  (http://kidshealth.org/parent/medical/endocrine/failure_thrive.html) and is seen by a nutritionist every few months.  Basically, he doesn’t weigh what he should for his age, even when they take his VLBW (Very Low Birth Weight) into account.  Getting that diagnosis, well, they might as well have diagnosed me, “Failure as a Mother.”  Feeding your child, a requirement of motherhood...staying pregnant for 40 weeks, another requirement…failed…failed…failed.  That’s how I felt.  I read other moms’ blogs, posts, comments on FB…so many of us struggle with feeding our children and I’m sure none of us ever thought it would be so hard or so much harder to get the resources, appointments and therapies necessary to help our little ones say, “Feed Me,” and actually mean it.  But, I do find comfort in knowing that I'm not the only one.

There are things we do to ensure Jack gets as much nutrition and high calorie food as possible…things I probably didn’t think I’d do before he was born.  We add full-fat butter and cheeses, he gets McDonald's once a week (and I often take pictures as he eats because I'm so amazed and relieved), he drinks whole milk with Carnation Breakfast Essentials added for extra calories, he still doesn’t use utensils, well, because finger foods = more calories in, we still give a night-time bottle with high-calorie formula, he has ice cream for a snack before bed most nights…and yes, he often eats in front of the TV, for a distracted toddler can be fed more than he even realizes.  Oh, and yep, we sometimes hold the spoon and feed him too! 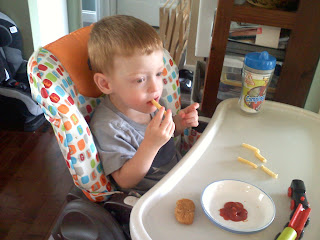 One of those chicken McNugget pics!
I’m not sure how many preemie moms actually read this blog, but if you are out there…leave a comment and let us know what has helped you with feeding and nutrition.  Or if you have questions or concerns, let me know.  I could have written forever about how we managed through the last two years of feeding Jack and I know there are others that struggle even more.  It seems so silly to even type that statement, but it's true...feeding has been a struggle and something to "manage," but I do know that for Jack's sake, we are much better at hiding our fears and frustrations that surround his food.  Perhaps that's why he looks like this when we have pizza!  But, I have to be honest...when it's possible for someone else to serve Jack a meal, I head for the door! 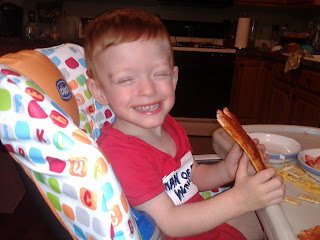