Newborn instead of NICU: The First Six Weeks 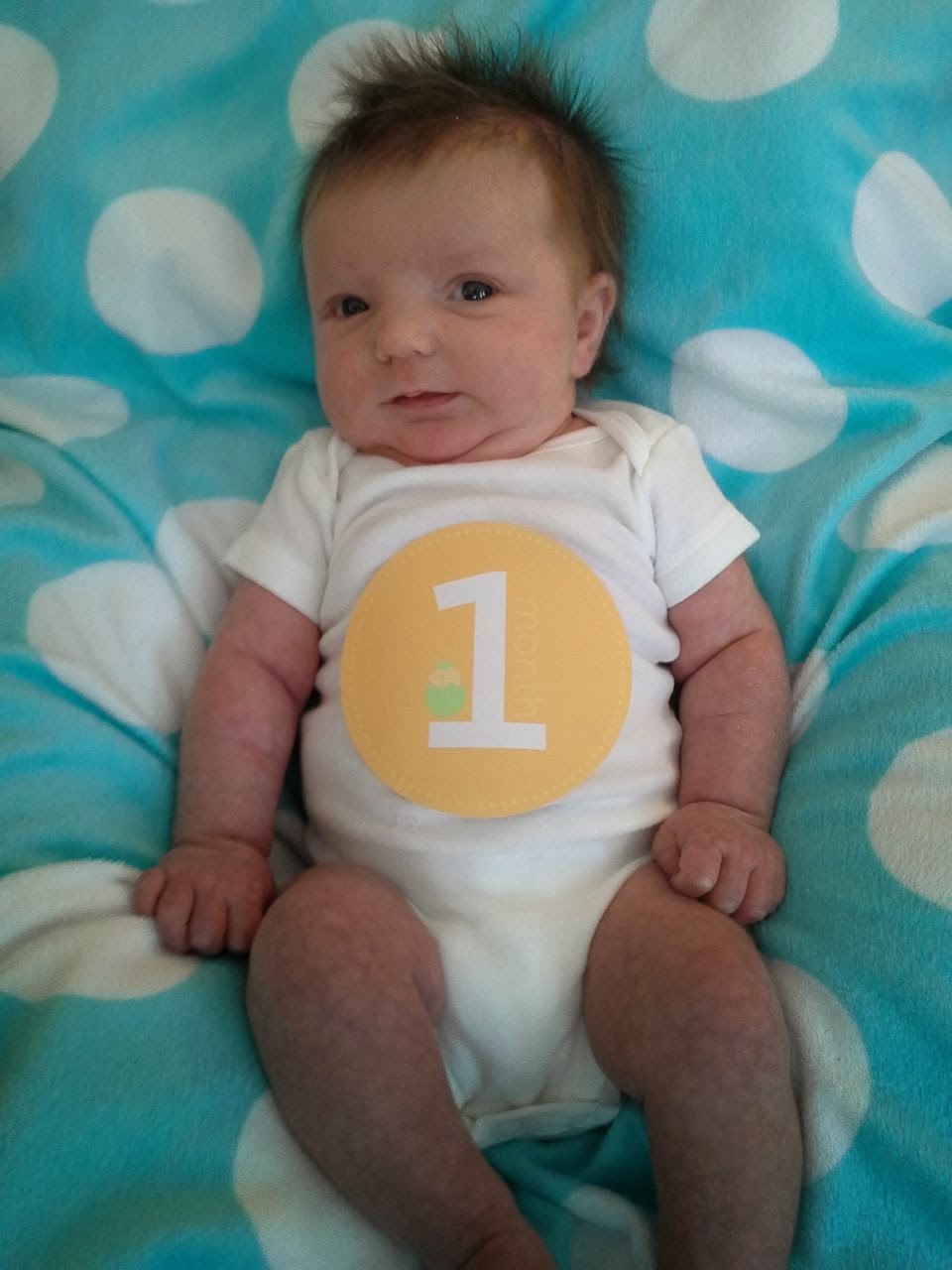 Disclaimer:  I really am fine.  If I needed help, I would ask for it and often do.  I may not have done it with Jack as often as I should have.  Lesson learned.

A few things happened this week.  Harper has slept 5-6 hours at night.  I think she finally noticed me and might even be trying to smile.  She had her 1-month check-up and weighs almost 10 pounds.  She is a cutie!  And then.  I watched that video of the mom who had driven her three children into the ocean; I breathed a sigh of relief as I saw all of the kids were rescued.  And then my niece pointed out, “Look at the mom.  She’s just walking around.”  And then my stomach clenched and I felt a wave of anxiety wash over me.  And then I immediately started thinking about all the judgmental commentary that would go along with video.  (No more "and then."  Hopefully you've all seen Dude, Where's My Car?)  Not that I’m condoning what she did at all.  But what led her to do it is what worries me.  “She probably told someone how she was feeling.  I bet she asked for help and didn’t get it,” I thought.  And then I’m pretty sure I said it aloud as well.   Many will say it is a flaw in our health-care system.  Mental health care isn’t well-covered, if it all.  But it made me think back to a Facebook convo I was having with my cousin this week.  I was telling her about my worries concerning Harper’s digestive system.  (Remember, my previous experience is of a kiddo with severe reflux, on 2 meds for that reflux, a special formula, and fed through a tube in his nose that I had to place every week.  Not a typical frame of reference.)  She had similar issues with her daughter (but worse) and was offering advice and even offered sleep.  Yep, she offered to give me 8hrs of sleep.  And I cried with relief at the offer, even though I may never take her up on it.  I mean, Harper sleeps 5-6 hrs.  I should be thankful and getting sleep.  But I’m not.  Not good sleep anyway.  And, yes, I know that is par for the course with a newborn.  I absolutely get it.  (We woke Jack every 3 hours until he was 10 months old to feed him with a bottle, then through the feeding tube and then held him upright for 30-45 minutes after to help him with reflux.  If I was lucky, I got 1.5 hrs of sleep between feedings.  I know exhaustion.  Mental and physical.)  But I don’t do well on little sleep.  I’ll be the first to admit it.  I don’t even like speaking to others until about 2 hours after I wake.  (Coffee has cured that some.)  But, I also know I shouldn’t complain or feel anything but happy that we don’t have that situation with Harper.   And here’s where that video comes in.  Not only is our healthcare system flawed concerning mental health, but so is our culture, our society.  If someone isn’t feeling anything but happy or pursuing happiness, then there must be something wrong with them.  I mean how many of you have heard the “enjoy every minute of it, they grow so fast!”  But what if you aren’t enjoying every minute of it?  Is there something wrong with that person?  Is there something wrong with me?  Why do I feel like it has to be all rainbow and unicorns?  Or in Jack's world, all trucks and cars?  I’ve heard too.too many stories of someone like me, revealing their feelings and being honest about their experience, only to the “but it could be worse” or “at least ______.”  I know I am guilty of saying similar things many, many times.  Why are so many uncomfortable with feelings other than happiness?  I mean, really, we were created to feel many things…anger, sadness, despair, elation, happiness, excitement….we can’t always feel the good feelings.  I don’t know about you all, but knowing about stories or experiences that our “worse” than ours (maybe a mom or child didn’t survive preeclampsia), don’t make me feel happy.  They make me feel sad, but also thankful.  You can be sad and thankful at the same time.  Or anxious and thankful at the same time.  Or even feel despair, while still feeling thankful.  In fact, I think that could describe how I felt the entire first year of Jack’s life.  When we made it to his first birthday and I finally felt like he was going to survive his battle with prematurity.

So, after reading that first paragraph (thank you!) you are probably wondering how I’m feeling right now.  I am extremely thankful.  Thankful that Harper is here and healthy.  Thankful that I survived yet another attack from preeclampsia.  But I am also anxious and putting a lot of pressure on myself to make this experience with Harper “easy”… “a breeze”… “a piece of cake” … as I have been saying to myself for weeks (or months, actually).   This should be “easy” after what we experienced with Jack.  That’s what I keep telling myself; meanwhile I have very little tolerance for anything that isn’t easy (or maybe I should say typical newborn issues)…like crying or gas pains or no napping.  I know a lot of my lack of tolerance is due to little sleep.  But as Jeff and I talked (after my afternoon of crying…I cried more than Harper), he articulated exactly what I have been feeling.  The first 2 years of Jack’s life, we used up all of our tolerance…on BIG things…like watching our child fight for his life for days that we thought would never end…or learning CPR because it was very likely that we would have to use it (thankfully, we did not…and that DOES make me happy)…waiting 112 days to bring our child home…or even now, risking my health to have another baby…I could go on.

So what am I trying to say?  I’m not really sure.  I didn’t get a lot of sleep last night.  Haha!  But I’m hoping to tonight, because my wonderful (and sleep-deprived) husband is waking with Harper overnight.  What a guy.  This is easier, but still not easy.  And if I call it a "piece of cake," please know that I don't love cake; I typically lick off the icing and throw away the cake.  I'd prefer a brownie. When I start talking brownies, then you know Harper is sleeping 8hrs or more!  I guess what I’m trying to say is yes, I’m happy.  Yes we are fine.  Harper is great.  Jack is great, but needs a haircut.    But I’m not just happy…I’m a lot of other things and I just wish I didn’t put so much pressure on myself to get this one right and for it to be easy.  Because the first time was so.so hard.  And I will probably always feel like I didn’t get it right for Jack (not staying pregnant, not being able to feed Jack “normally,” etc.).  I also think there’s a lot of leftover anxiety from our experience with Jack and I’m projecting it on my experience with Harper.  We spent a lot of time at home (months and months) with Jack, protecting him from illness.  We’ve spent 6 weeks at home with Harper, which is a short time in comparison, but I feel anxiety about being isolated at home for so long…and anxiety about making the decision to start taking her out for fear that she might get sick too.  (I know her health is not compromised like Jack’s, but she still doesn’t need to be exposed and develop strep or the flu or that dreaded RSV at this age).  Before she even wakes up (especially at night), I fear that she might wake sooner than last night and I’ll get even less sleep.  When she eats, I wonder if it’s enough or too much.  (With Jack, he had a “prescribed” amount he was supposed to eat each day and if we still saw a nutritionist, he’d probably still have one.)

So, I’m still not sure what I’m trying to say…hopefully you are less confused than I.  Maybe it’s this.  One of the biggest lessons I’ve learned since having Jack (and now Harper), is that that society and it's expectations about mothering and parenthood sets a lot of us up for feeling like failures.  Like we aren’t doing it right.  As in, because Harper is sleeping so well (or eating so much or pooping the right color), that I should be only happy.  Nobody seems to be honest about what it’s really like to be pregnant (and how dangerous it can be) and to be a mother. I used to think what happened to us with Jack was so non-typical, and that made me feel even more guilty and disheartened, but since I've been open (in our blog, etc) about what it's really been like, I have felt less alone…less isolated.  So, for anyone who is considering another child after prematurity, I’m putting it out there.  Here’s what it feels like for me.  I can’t be the only one…can I?

And I’m almost afraid to publish this.  But not that afraid.  In fact, now that I've gotten it out, maybe I will get some sleep.  'night!